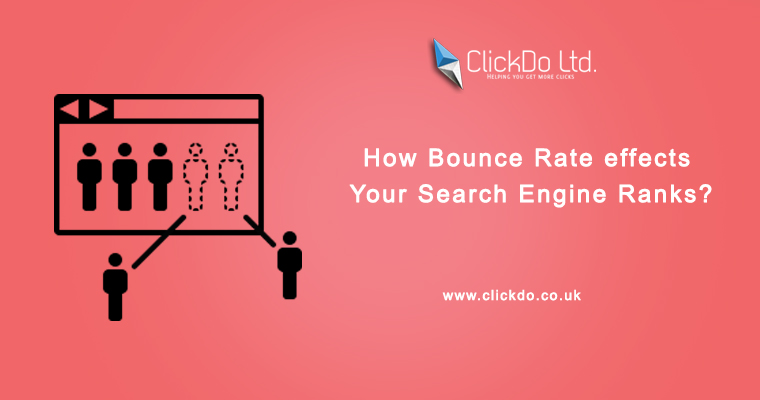 What is Bounce Rate?

Bounce Rate is the percentage of the people who are visiting your website from the search results and reverting back to the SERP’s within the short period of time. 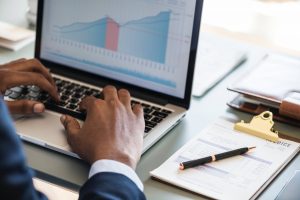 That is if the users visit your webpage and leave the site immediately without making any interactions with your site, then the bounce rate increases.

Increase in the bounce rate indicates that the content in the webpage is not fulfiling the users need and hence some tweaking should be done in order to make the users stay on your page,

Google uses the bounce rate as one of the main ranking signals.

More the bounce rate indicates that the content present in your website is not relevant to the users who are visiting your site searching for a particular keyword. Hence Google will not show your website on top if your site has more bounce rate.

How to Reduce the Bounce Rate?

There are many ways by which you can reduce the bounce rate of your website. You can add some media files like Infographics, Videos, etc. This will make the users to spend more time on your website. In the meantime, try to find out what the users are looking for and add update the web pages based on that. This will result in a low bounce rate.

If your website receives a very low bounce rate, then from the Google’s view, your website has quality content what the users are looking for. This will result in the rank boost for your website.

Not only the content matters, but even the website interface also plays a vital role in reducing the bounce rate.

Even though the site has quality content, users will bounce back to the SERP if the interface doesn’t look to be pleasing.

Hence overall you should make the webpage look good with fruitfull contents to reduce the bounce rate and improve the ranks on the Google SERP.

Google RankBrain and the Bounce Rate:

Google’s RankBrain is the AI which modifies the ranks on the website based on the user’s behavior on the Google SERP.

Bounce rate has a huge impact in the effecting the ranks of your website.

Let’s take a scenario here, say your website is ranking at #2 for some keyword if the users landing on your webpage from Google bounces back to the SERP in a quick time without taking any action on your website.

The same user if visits the webpage which is ranking on #4 or #5 and if spends more time there. Then Google’s RankBrain will note this action.

If Google finds similar actions from many people around the web, then it will give a rank boost to the website which is ranking at #4 or #5 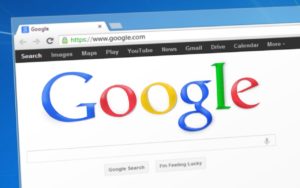 That is the Google’s RankBrain AI uses the dwell time as the important factor in the ranking of the webpage. If the user spend more time on the website, then it has more dwell time which is a good sign for SEO.

Nowadays, AI plays a vital role in defining the ranks of the webpage by monitoring the users activity on Google SERP.

Hence as an SEO Consultant, you should give importance to reduce the bounce rate of the website and engage the users in the website for more time.

It’s fine to build lnks and move it to first page. But to sustain the ranks on the Web, you should be smart enough to engage the users with your website for more time.

You can get in touch with the ClickDo team and can get some ideas on making the perfect landing page design to engage the users in the website.

How to optimize the images in the content for better SEO? 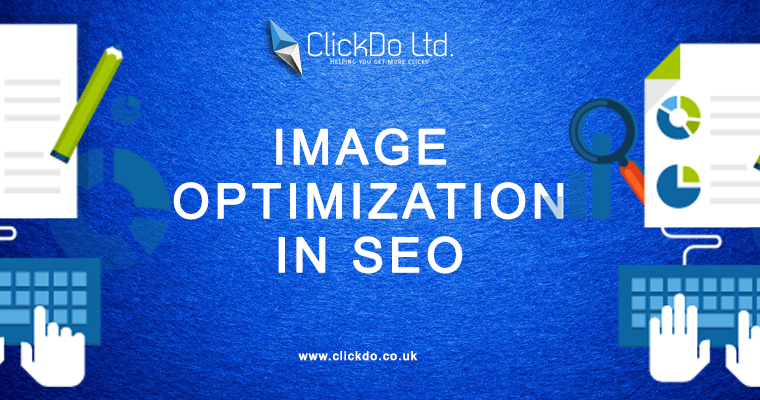 Optimizing the text content alone will not help your website to perform well on the SERP. It’s more than that. Google considers each and every media files present on the web page.

It is important to optimize the media’s like images on the webpage to make the content rank on the top of the Google SERP.

Here let’s see some Image optimization tips to make your webpage perform better on the SERP. Use the images in the correct resolution which suits your UI/UX design of the website.

Ensure to use the images which doesn’t affect the responsiveness of the website in both the mobile and the desktop.

When you try to use the images which are captured in the high-end camera’s. You should compress the size of the images before uploading. 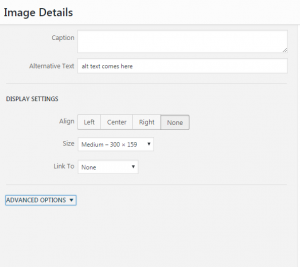 By default image size will be huge,

You can compress the images by without losing the quality. Many open source softwares are available for this. By using the compressed images you can increase the loading speed of your website.

Use the XML Sitemap to make the images to be crawled and indexed by the Google.

As like you do for normal pages, XML Sitemap submission for the images is also mandatory.

You can also exclude some of the images being crawled by the search engines. Thus overall image optimization will help you to improve the ranks.

These are some of the image optimization tips which you should follow to rank your content on the SERP for the target keyword.

Meta Description – Are still a ranking factor in SEO? Here let’s see about the importance of the meta description and its importance.

When it comes to writing meta descriptions think less about SEO and more about the Click Through Rates (CTR). Meta descriptions are the small snippets which are displayed on the SERP below the site links. Make sure you write the unique description for the post or the web page that you are going to publish. Don’t copy the content and directly paste in the meta description section.

Try to embed the target keywords in the meta description section, but make sure that you don’t stuff the keywords.

Write a crispy short description without exceeding the character limit of 160. 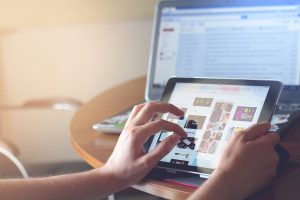 Try to have a call to action like phone number, mail id or something else in the meta description.

Avoid writing the irrelevant meta descriptions to the content present in the web page, as this will lead to an increase in the bounce rate of the website.

Don’t overdo the meta description by stuffing the target keywords or by updating with the irrelevant content.

These are some of the tips for you to write a good pleasing meta description which will look positive for both users and the search engines.

Updating the crispy SEO friendly descriptions will help you to improve the ranks of your website on the Google SERP.

To learn more about SEO & explore more skills. Have a look at the SEO Training course by the #1 SEO Consultant in London, Fernando Raymond – https://clickdo.co.uk/seo-training-course/

How difficult can be ranking my webpage on number one spot for desired keywords? All digital marketing aspirants who are going to make a debut,  ask this question a number of times in their lifetime, so did I. Having written more than 500 SERP friendly articles for different publishers, ranking my webpage was not going to be the only priority. I knew I wanted to build a career out of it (Digital Marketing). I had always been the SMM guy (Connect with me), be it in my college or at work. So, it was time for a new beginning or more like an inception of planned thoughts

The major point of concern happens to be the beginning of efforts and the direction towards which they need to be directed. Talking about directions, I was quite perplexed and little disoriented as I had just left my marketing job at Ziffi after much convincing to my parents.

So let’s get in ranking my webpage in details

Being active on social media has its perks, as every day after going through different blogs and posts I inferred that event blogging is a double-edged sword undoubtedly. One day I came across the schedule for Comic Con event which is the Mecca of social influencers, comic lovers, entrepreneurs and learners.

I decided to attend the event and post about it on my blog Neil’s Phrontistery which I had recently started. Using keywords and Hyperlinks to my advantage 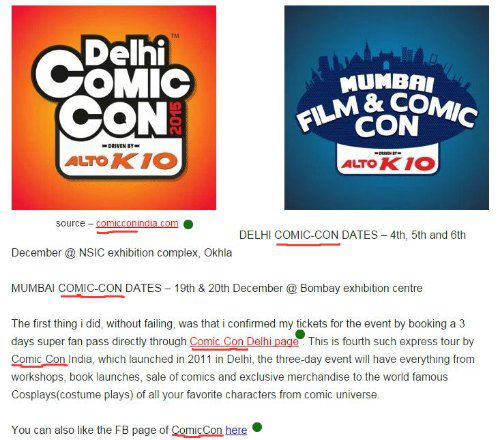 As you can see in the above pictures that I have put the keyword in the title and also maintained the minimum keyword density (see the underlined texts) which is somewhat 1% of the total number of words used in the post.

Another important aspect that helped me in ranking my webpage is the hyperlinks. It is of great significance when you are writing about something authoritative and so it helps in drawing out some juice for your blog. The green dots that you are seeing are all hyperlinks which I have connected with respective sites and pages. This step should be done cautiously as too many hyperlinks in your post and you may end up being misunderstood as a spammer!(which BTW no blogger wants)

As soon as I read about Neil Nitin Mukesh joining the Game of Thrones bandwagon, I grabbed this opportunity with both hands. I was also aware that Kristian Nairn of GoT fame was going to visit the Comic Con Delhi so I created an intermediary post amalgamating this information without wasting any time. I repeated the same set of trusted protocols(keywords and hyperlinks) and reblogged the  Firstpost article, adding some value to it (as you can see in the above picture) related to Comic Con.

Optimizing the images to the fullest

You simply can’t ignore the images as they play a pivotal role in making your post easily accessible to the Google crawlers. All you have to do is write the image description and alternate text section according to the keywords.

And yes, this has a huge impact when you are sharing the post on Google plus because then Google identifies your site at the drop of a hat (preferably the black one) and can easily rush to your site for the content respectively.

PS –  try uploading image files after reducing their size so much that the gist remains intact, hence no chance of any collateral damage(if you know what I mean). 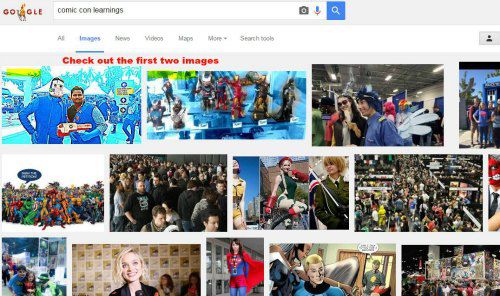 See how I am ranking at number one for images solely on the basis of basic image optimization skills.

This one proved to be the final nail in the coffin of my competitors as after I attended the event, without wasting any time, I jot down my learning and experience at Comic Con. I had to prepare a little more for this as I had so much content to deliver as in the amazing entrepreneurs I came across and the awesome costume role plays of course, which were the icing on the cake. I was partly nervous and pumped up at the same time as this was going to be my debut as in my first toddling steps into the digital marketing arena. But wait… there was a catch, after the first day I finished writing the third post, my position tanked to 2nd page as many news blogs pushed content simultaneously. But again Google took note of the fact that there were indeed noteworthy hyperlinks and back links on the site with adequate details of the event and so…

Boom!!! as you can see that I am ranking my webpage ahead the authoritative players when searching for the keywords – Comic con learnings, Comic Con Delhi 2015 learnings 🙂

I was totally flabbergasted by the results as this was quite a booster for a guy who had started focusing on the blog barely a month ago. This advancement instilled a much needed boost to my trying self and I felt that I am on the right track.

When we are throwing punches, we tend to lose patience for the outcomes. My advice is just don’t do that and think about the impact every effort is going to catapult and then you will realize your doubts melting away!