If you could hear the screams in the SEO world last month you would think that the sky was falling. That the Google gods had come down and let off bolts of lightning at websites across the internet.

The truth of that matter though is –  yes there was a big update to Google’s search algorithm, and yes everyone in the SEO world needed to pay attention to it because it was one of Google’s biggest updates since they started releasing updates.

It was also the first time Google had named their update, they named it the March 2019 Core Update.

They did this I believe in a tongue in cheek way because every other update up to this point has been named by influencers in the SEO world.

So to come out and give it a name for the first time is significant – it means they think they have the foundations of a finished product and want to talk about it publicly.

The finished product they are alluding to is their new way of ranking websites on the Google search results.

You can see in the image below an example of what happened to a lot of top sites across the internet.

The good news though is generally after a couple of weeks, the websites that were at the top went back to the top. But you can imagine the chaos and uncertainty this caused people, scratching their heads wondering why they aren’t numbered 1 anymore. 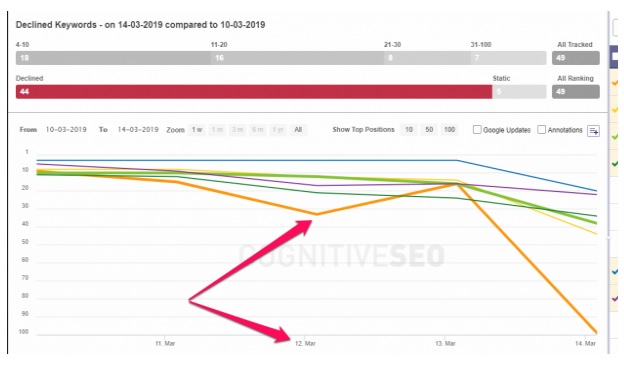 They have been testing extensively for about 2 years now on what they want the future of search to look like, and how they can get the user experience even better.

You see Google’s philosophy is how do we answer the customers question with the best answer in the quickest time.

So naturally, it wants to rank the best websites, with the best customer experience and the best information at the top of the search results.

The technology Google has been testing over the last couple of years is called Rankbrain in the SEO world. In normal terms, it is simply an artificial intelligence program.

Basically, Google used to have algorithms made by some of the best minds in the industry to make black and white decision making.

These algorithms decided which websites got to the top of Google and which ones didn’t.

The problem was these algorithms were easily exploitable and the SEO community are always looking for hacks to rank websites higher on Google, so they abused the loopholes.

This, in turn, made Google release more updates to their code, but every time they closed one loophole, SEO ninjas would find another loophole and then rinse and repeat.

On top of this, you have a lot of manpower that Google had to use in order to keep on top of all this and to keep releasing new updates on a consistent basis.

So it was only natural for them to find a way to reduce the manpower cost, which could be used more effectively in other areas of the business.

This leads them to create artificial intelligence to replace themselves within their own business.

Like most artificial intelligence systems they started from a blank slate, and it simply watched and learned.

Google has 20 years of experience and wisdom, and they already knew a lot of the ways the older system could get exploited.

So after a while, they let it loose in the wild on a small percentage of the internet to see what it did.

Kind of like letting your kid loose into the world when you take the school for the first time.

Over time this A.I. got better and better, to the point that we reached last month where they released it fully into the wild.

The Google search engine is now completely run by an A.I. and it basically means all the rules change on a daily basis for what website should rank at the top of Google.

There was massive disruption across the internet, some websites that were number 1 dropped down to page 2 or 3, and some weren’t even in the top 100 results anymore.

Websites that were on the second or third page found themselves on the first page.

Chaos ensued and the end of SEO was proclaimed…

This week, we released a broad core algorithm update, as we do several times per year. Our guidance about such updates remains as we’ve covered before. Please see these tweets for more about that:https://t.co/uPlEdSLHoXhttps://t.co/tmfQkhdjPL

The Beginning of the End

This is it, folks!

This is where the amateurs get off and the people who are serious about their online presence continue forward.

I personally don’t worry about updates, because for me SEO is simple. The best SEO gives Google exactly what it wants for its customers.

It wants to be best friends with its customers and it wants to give the best advice possible on what website they should go on, to answer their specific problem.

It does not want to deceive them in any way, and it never wants them to have a bad experience.

It wants their customers to get their answer in the quickest, most efficient and most effective way.

All it wants is for you to give them the website that they can trust and proudly send their customers to.

Yes, there are some tweaks here and there with each update, but really if the SEO is good these tweaks were already done before Google started demanding it.

The only difference is now they have to teach this philosophy to Artificial Intelligence. The A.I. that was once the student is now becoming the master.

The reason for this is it can measure things and compile data millions of times faster than people can.

So it can run experiments very fast to find out random things, and whether those random things are good or bad for the customer experience.

For example, websites that are https which means it’s secured from data hacking, at one point got a boost in rankings because a Google employee had programmed some code to give a bonus to https websites.

However now the A.I. is coming up with the rules, what is interesting is the A.I.  comes to many similar conclusions that Google has come to over the years. So it too ranks https websites higher than HTTP websites.

Why does it do this?

Well, it has come to its own conclusion that https is a positive signal for a good website.

It most likely found that customers stayed longer on websites that were secure, they probably purchased more products from these websites or they filled out more forms.

The conclusion may be the same as Google but the working out is different.

Google gave the ranking increase because being the tech nerds they are, they knew that an https website is better than an HTTP website because it is – and there is no further discussion needed.

The A.I., on the other hand, worked from a blank slate but was able to look at thousands of different factors and A/B test every minute of every day. Which leads it to be able to come to the conclusion that it’s better to rank https websites higher.

So why is this important?

Well because the working out on how what and why a website ranks at the top of the search is different.

It will change on a daily basis and at a moments notice it could flip turn upside down and inside out if it thinks that the new method is a better way to rank websites.

What This All Means For Your Business Moving Forward

In a nutshell, it means now, more than ever you need to make sure that your website is the best it can be. The rules may be changing, but Google’s philosophy stays the same. Quality content, quality websites and quality experience.

I once listened to a guy who wrote a very long book, he said he wrote it that way because he only wanted the people who spent the time to get the real juicy stuff.

I am all out of time this week, you will have to click here for the next part for the answers.

Hint: If you can read between the lines, the answers are all in this article.

Matt Hale
I take care of ClickDo Ltd. Birmingham SEO Clients - I help businesses grow online with the latest SEO services & digital marketing strategies. Personally, I like to work with a small number of clients and focus intensely on those projects. This allows me to have the time to constantly be keeping up with the latest trends in Google.